When you put up a bluebird nesting box, it is important to realize that other native cavity nesting birds may nest in it.

This is perfectly fine and you should allow them to nest undisturbed (NOTE: this does NOT apply to house sparrows or starlings which are invasive, non-native species).

Also, you need to know that it is against state and federal laws to disturb the nests, eggs, or young of any native nesting birds, even if the nest is in nest boxes that you provide.

Other birds that may nest in bluebird housing are species that can fit through the 1 1/2" entrance hole.  This would include Black-capped Chickadees, Tufted Titmice, White-Breasted Nuthatches, House Wrens, Carolina Wrens, Tree Swallows, Prothonotary Warblers (rarely) and Downy Woodpeckers (although these birds usually prefer a larger sized box).  Some of these birds prefer more wooded locations with greater cover.  By putting nest boxes for these birds in the areas they like more, it will reduce the competition with bluebirds.  The exception here is Tree Swallows that prefer the same open, grassy habitat liked by bluebirds.

There are other wonderful cavity nesting birds you can attract, which require larger or more specialized housing.  This would include Purple Martins, Wood Ducks, Great Crested Flycatchers, Screech Owls, Flickers, Red-Bellied Woodpeckers, Hairy Woodpeckers, and Kestrels.  However, sometimes it is difficult to get woodpeckers to nest in nesting boxes because they can prefer to excavate their own nest cavity in a tree.  But, Flickers seem to readily accept nesting boxes.

Here are some descriptions of Other Cavity Nesting birds you may attract with nesting boxes:

1.  Tree Swallows - first, understand that it's perfectly fine for other native birds to be interested in your bluebird box.  Depending on the location of the box, it may be perfect habitat for another bird species. 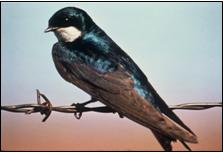 Tree Swallows are the most common competitors that take over bluebird boxes.  They like the same habitat as bluebirds and are usually more aggressive.  Their nests look similar to bluebirds, but usually contain white feathers as well.  Also, their eggs are white instead of light blue.  Many bluebirders are annoyed by Tree Swallows because they can be very abundant in some areas, especially where water is abundant.

2.  House Wrens are another tough competitor for nest boxes.  Wrens are very aggressive despite their tiny size.  They build nest made entirely of sticks and will fill up the entire nest box.  Also, they tend to fill up more than one box in their territory.  These are called "dummy" nests.  They are persistent and will often not allow the larger bluebirds to nest in a box.  The only solution is to place your bluebird boxes as far away from dense cover as you can.  Wrens prefer thickets, shrub rows, and dense overgrown habitats.  Putting your bluebird boxes as far out in the open as you can will greatly eliminate the problem.

CAUTION:  House Wrens are known to destroy bluebird eggs and even pull the hatchlings out of the box.  Therefore, if you want to attract bluebirds to your yard, it is advisable to NOT encourage house wrens to nest in the same vicinity.  At a minimum, you should consider removing all of your hanging nesting boxes, as these are preferred by wrens.  For more information on how to discourage house wren nesting, see our Problem Solving page - Nest Box Competitors.

3.  Black Capped Chickadees - Black-capped Chickadees are often at the bottom of the pecking order when it comes to competition for nest boxes.  Many nest box monitors will put a 1 1/8" hole restrictor over the entrance so the Chickadees can nest in peace.  You know you've found a Chickadee nest when you discover a nest containing mostly moss and lined with fur, hair, plant down, spider webs or other similar soft materials.

Egg laying begins one to two days after the nest is finished - usually 6-8 eggs are laid.  Chickadees will cover their eggs with nesting material whenever they leave the nest.  They are small, pinkish-white, and non-glossy, with red, brownish red, or purplish red specks evenly distributed over the egg. Often, there are heavier spots at the larger end of the egg.   As with Tree Swallows, House Wrens and Titmice, incubation begins when the next-to-last egg is laid. The incubation period lasts 12 to 13 days, with fledging occurring at about 16 days after hatching.

4.  Tufted Titmouse - Tufted Titmice do not nest as readily in nest boxes, but are the occasional occupants.   Their nests are constructed of leaves, moss, dried grass, and bark strips, is lined with feathers, fur, wool, cotton, hair, and sometimes snakeskin.

Females lay one egg per day, and the average clutch size is 5-6 eggs. The smooth, non-glossy eggs are white to cream-colored and are speckled and spotted with chestnut-red, purplish red, or brown marks, which are usually more densely distributed at the larger end of the egg.   Eggs are incubated for 12 to 14 days. Only the female incubates the eggs, and she does not flush readily from the nest. Whenever she leaves the nest, she covers the eggs partially with nesting material (as chickadees do).  Fledging occurs after 15-16 days. We strongly believe in diversity, equity and inclusion of all without regard to race, color, sexual orientation, disability or age.  We strive to welcome and engage with ALL. - the Michigan Bluebird Society 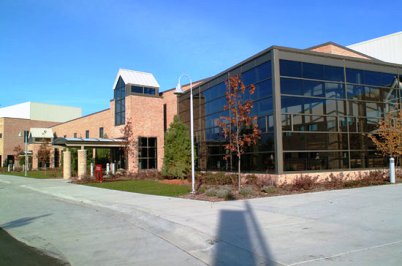 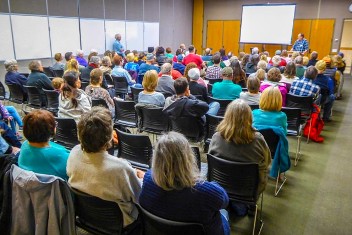